It’s really hard to imagine that 20 years have gone by.  I could still remember the chaos, terror, and confusion of that day.  I could still smell the rancid air if I think about it. We all know where we were on 9/11 and if you were from New York, you saw the carnage right before your eyes.

I was teaching that day. I remember my school being put on lockdown and for some reason, I had the only cell phone that would work. My cell phone carrier was not out of the trade center as most were. Some of my students were crying because their parents worked in the towers. I didn’t know at that moment 260 people from my community wouldn’t be coming home. Living only eight miles from the city, it was normal to have a career in Manhattan.

At the World Trade Center (WTC) site in Lower Manhattan, 2,753 people were killed when hijacked American Airlines Flight 11 and United Airlines Flight 175 were intentionally crashed into the north and south towers, or as a result of the crashes. 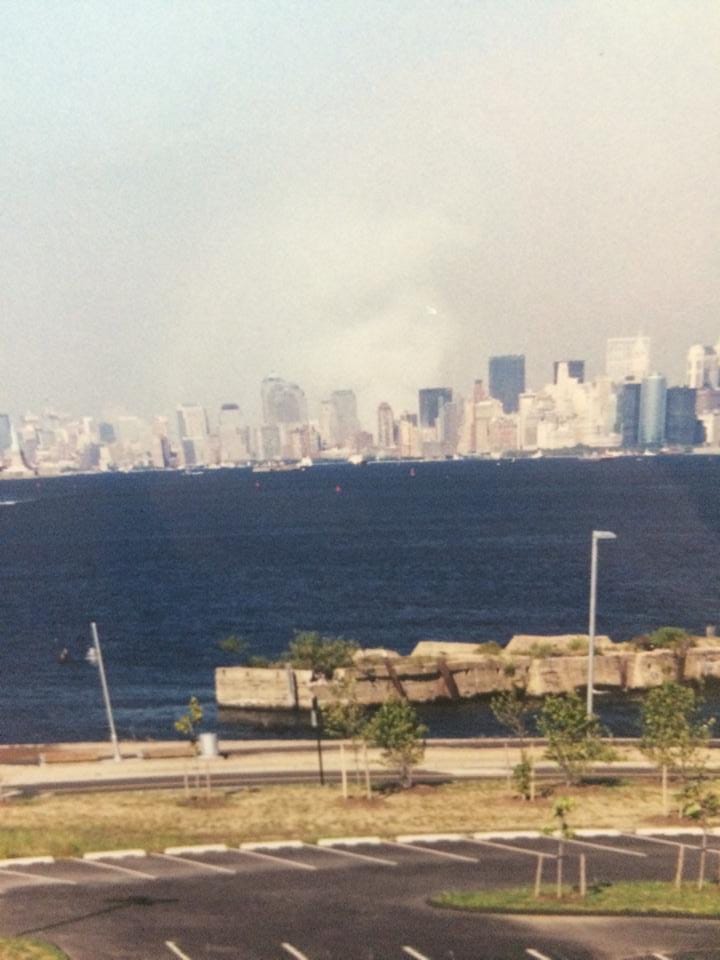 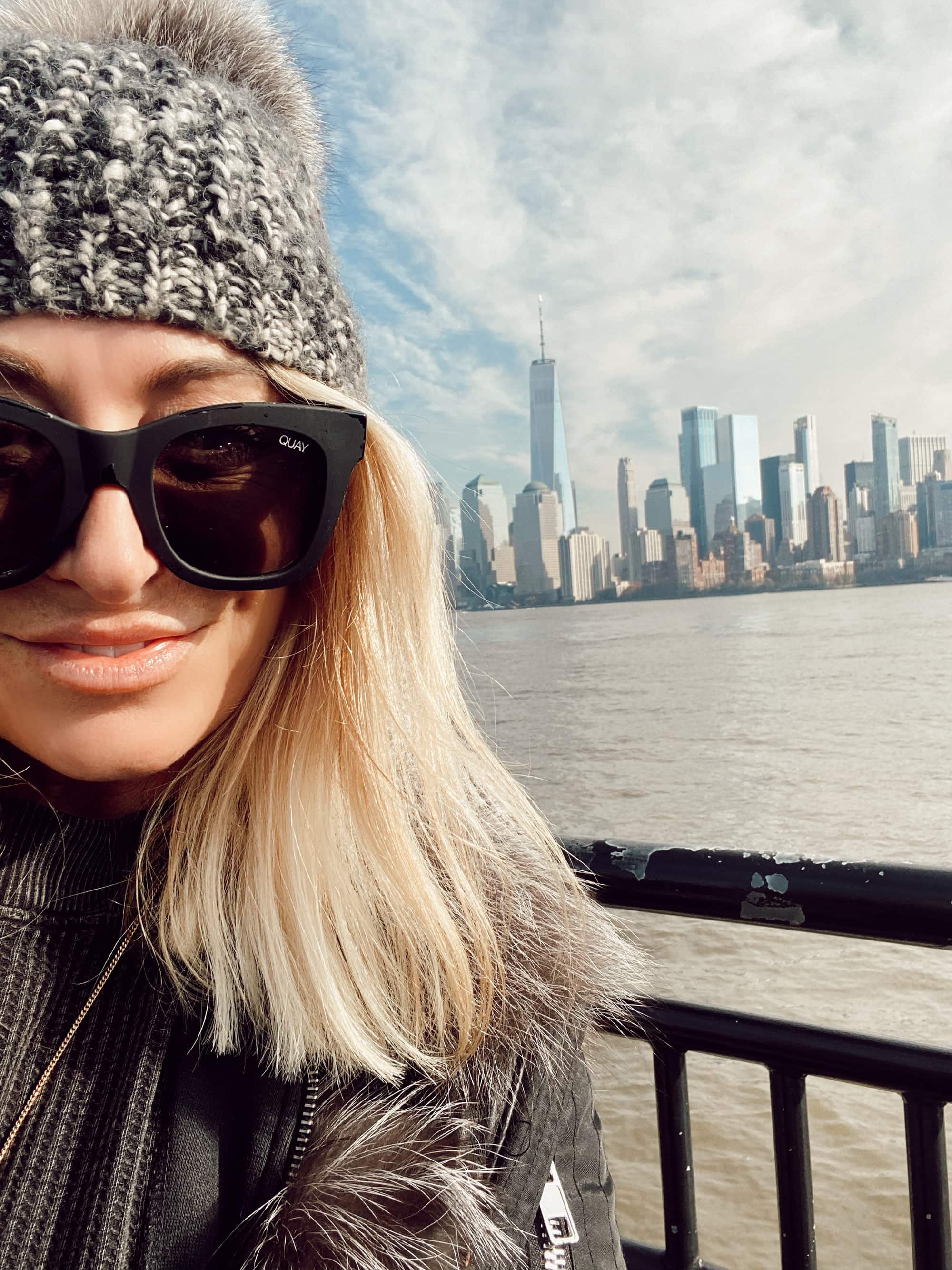 Seeing It Before My Eyes

When they finally realized there weren’t terrorists driving through the streets, they released us from school. The journalist in me rushed down to the water’s edge and I started taking photos. Photos of a skyline that would never be the same. All I saw was smoke in the air where two towers once stood. I was utterly sick and frightened.

I went into the city with a few friends and started filming. Now, twenty years later, I still haven’t watched my footage. I remember the walls of the missing, pockets of people singing New York-themed songs like Frank Sinatra’s classic New York, New York. It was crazy. Utter devastation.

When we worked our way down to Ground Zero, I remember seeing firemen crying. A vision I could never get out of my mind. At that moment we didn’t know how many died, but they did. The smell of burning metal lasted for months. 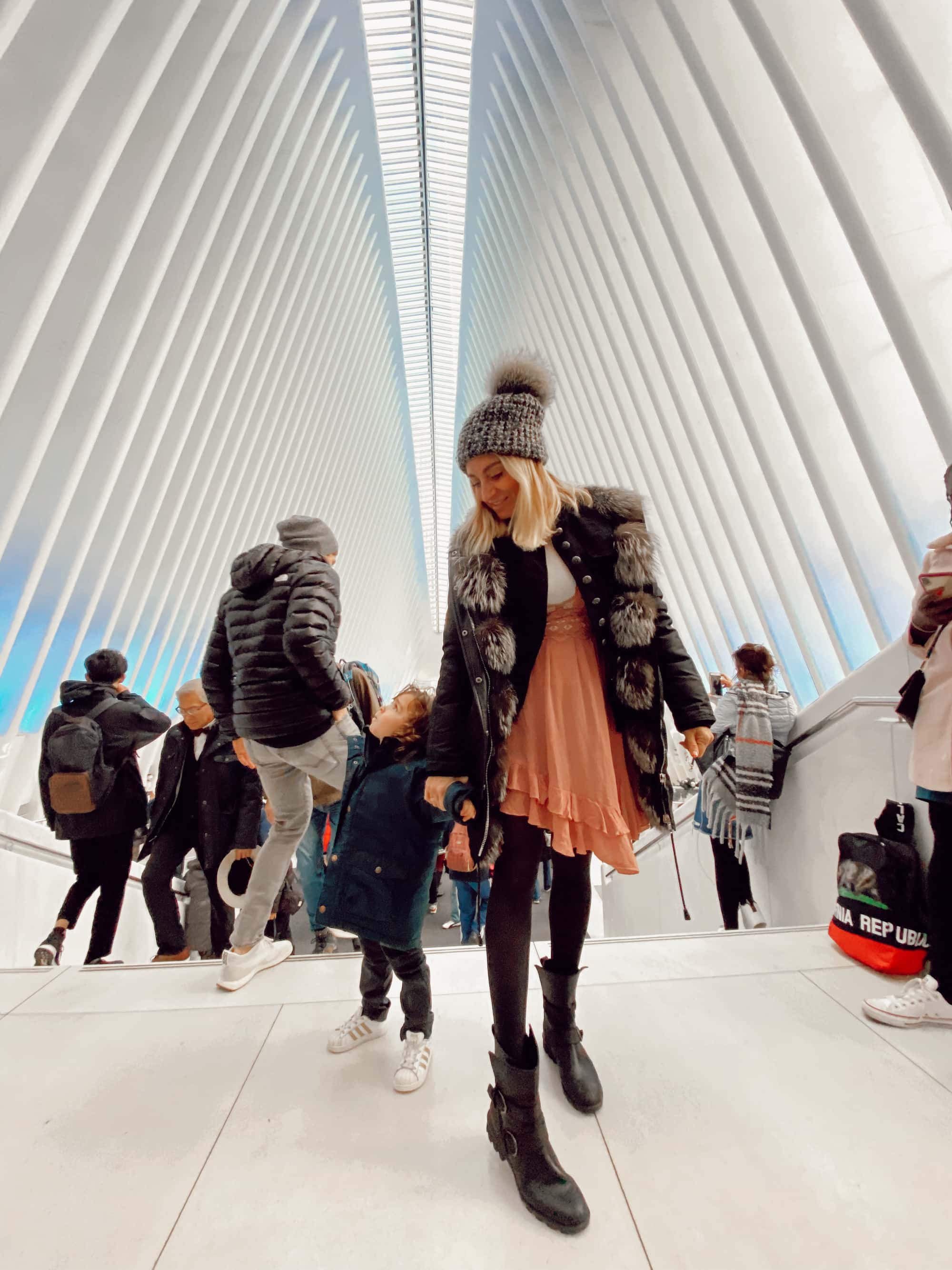 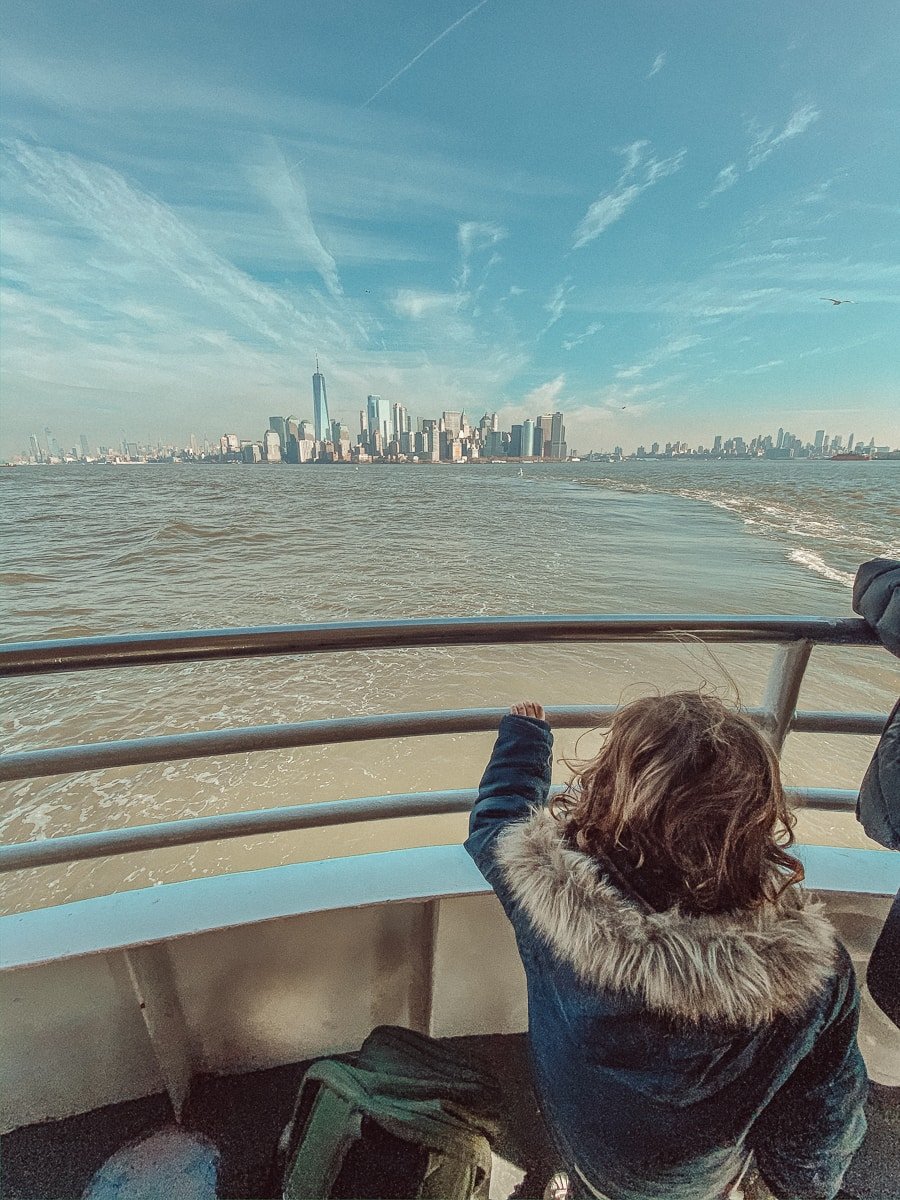 Have you listened to my podcast? Check out The Mom Confidential!

One World Trade Center’s tower observation deck was specifically constructed with the memory of the Twin Towers in mind. The deck itself begins at 1,362 feet, and a glass parapet extends to 1,368 feet—the exact height of the South and North Towers. 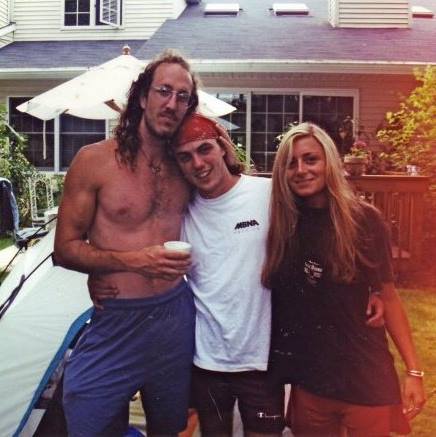 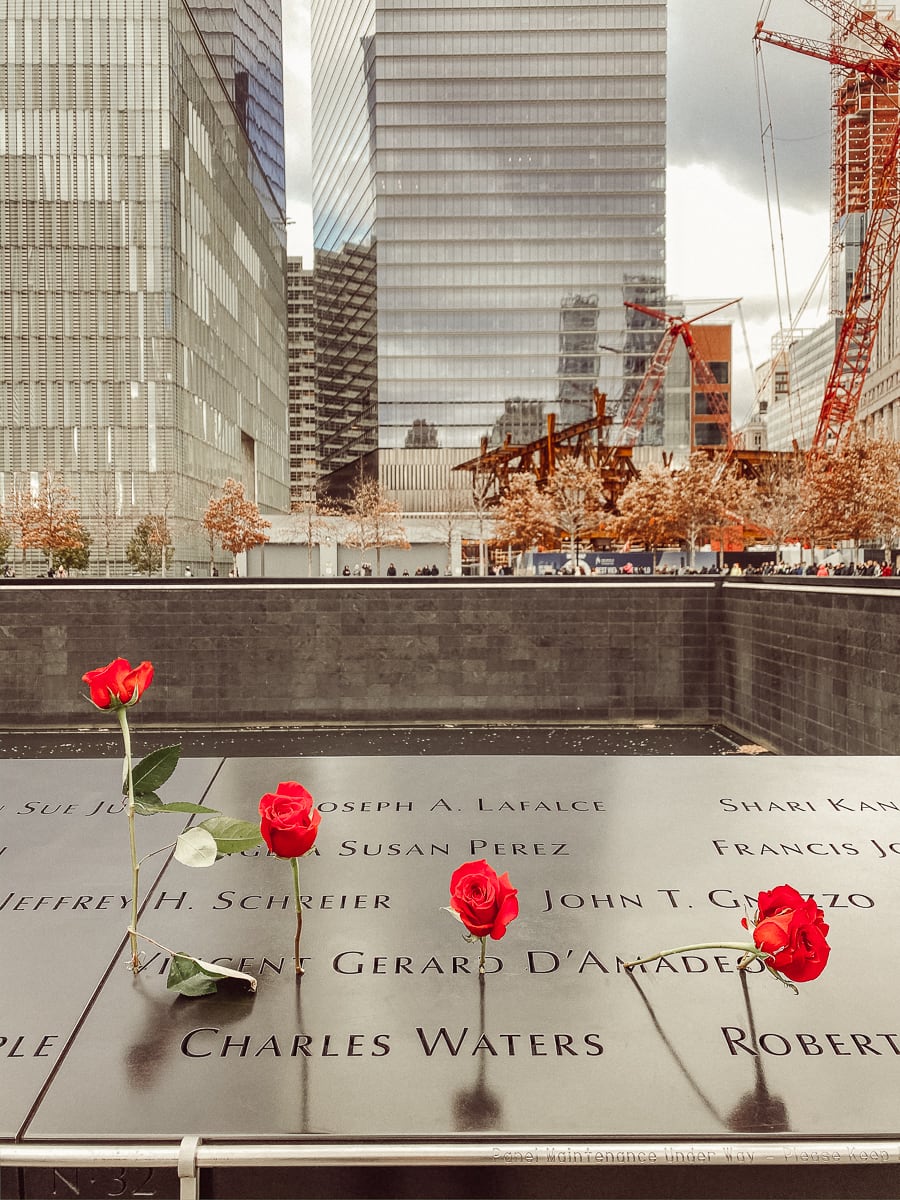 Saying Goodbye to Those We Love

We found out as the days went on the names of those who perished.

I didn’t know Jackie would lose her husband.

I didn’t know my students would lose their parents.

I didn’t know Rob on my softball team was gone.

I didn’t know I would attend ten plus funerals and have nightmares for years to come. On that day, 260 innocent souls were taken from our community. It was a very somber and scary time. Everywhere you looked, the American flag would be blowing in the wind. The flag took on a new meaning that day. The flag symbolized unity, that we can’t fall and won’t be taken down. Seeing the flag everywhere meant we stood together as a city and as a nation. During the following weeks, I witnessed so many people come together to cheer on the human race.

One of the trees that was planted around the 9/11 Memorial actually lived through the attack. It is known as the “Survivor Tree.” People were actually able to recover it from the debris and plant it on the site of One World Trade Center. It is a symbol of rebirth and survival. 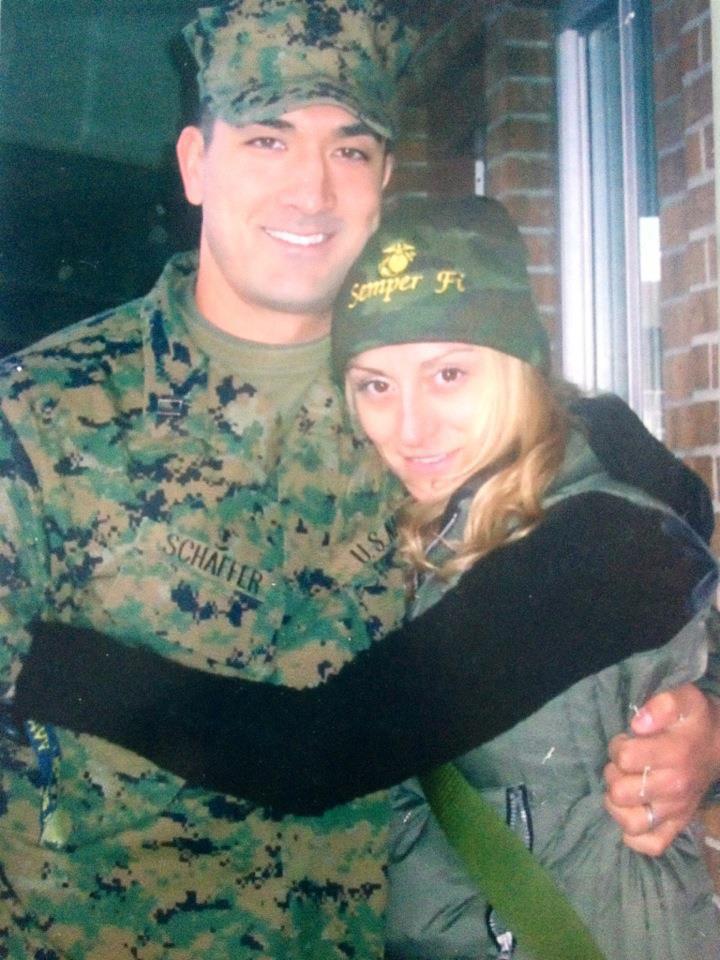 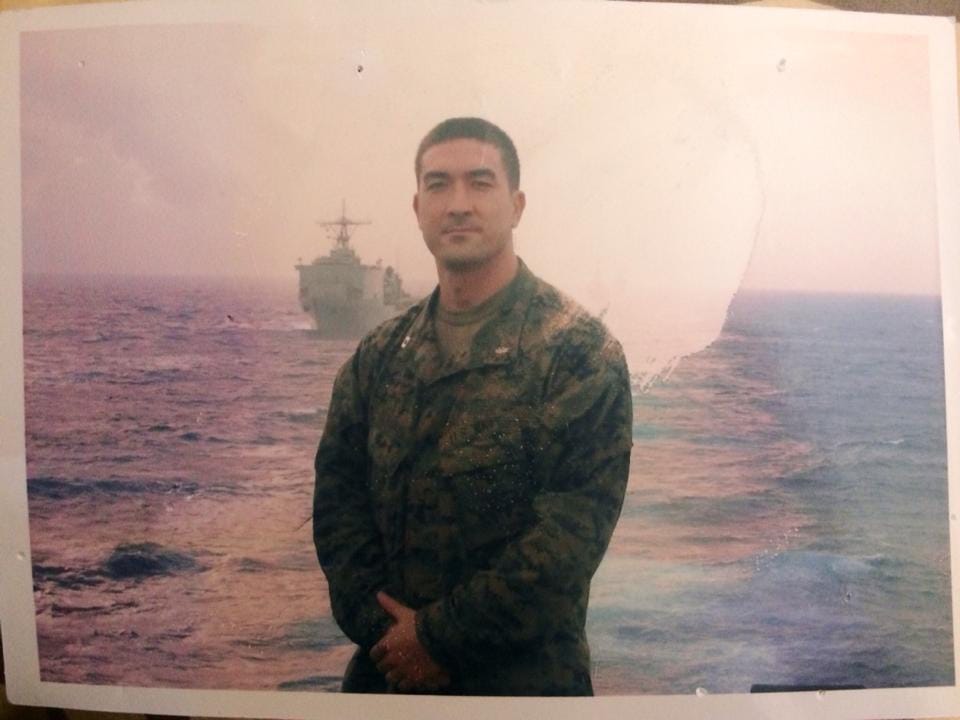 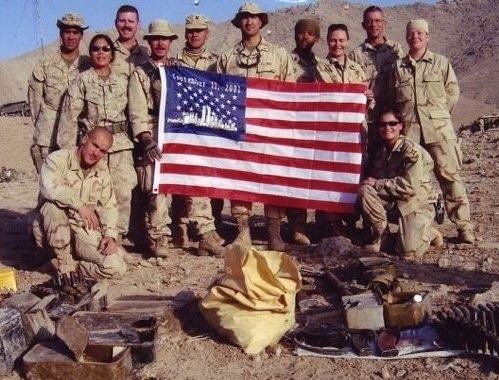 Mayor Giuliani said to go to the city and spend money. “Go out to eat, the city needs your help.” After attending benefit after benefit, we listened to his plea. I went to Asia De Cuba, a trendy hot spot on Madison Avenue. Who knew I would meet my husband that night? Who knew my future of creating four children was standing right in front of me?

I went on to marry Bobby and become a military wife. 9/11 never ended for me because he had to serve in the war in Operation Enduring Freedom. I was in for the long haul with the effects of 9/11. I had to brave up and deal with the fact that my husband was going head-on with those responsible for that solemn day.

Bobby went into Afghanistan with the marines as a Navy dentist. I never thought he was going to be put in harm’s way, but he was. He acted like a medic when needed and went into the villages with the marines facing this horror head-on. I remember on one of his missions he recovered weapons and a 9/11 American flag.

Check out all my parenting ideas on the City Girl Gone Mom Pinterest board!

It took 3.1 million hours of labor to clean up 1.8 million tons of debris at Ground Zero. 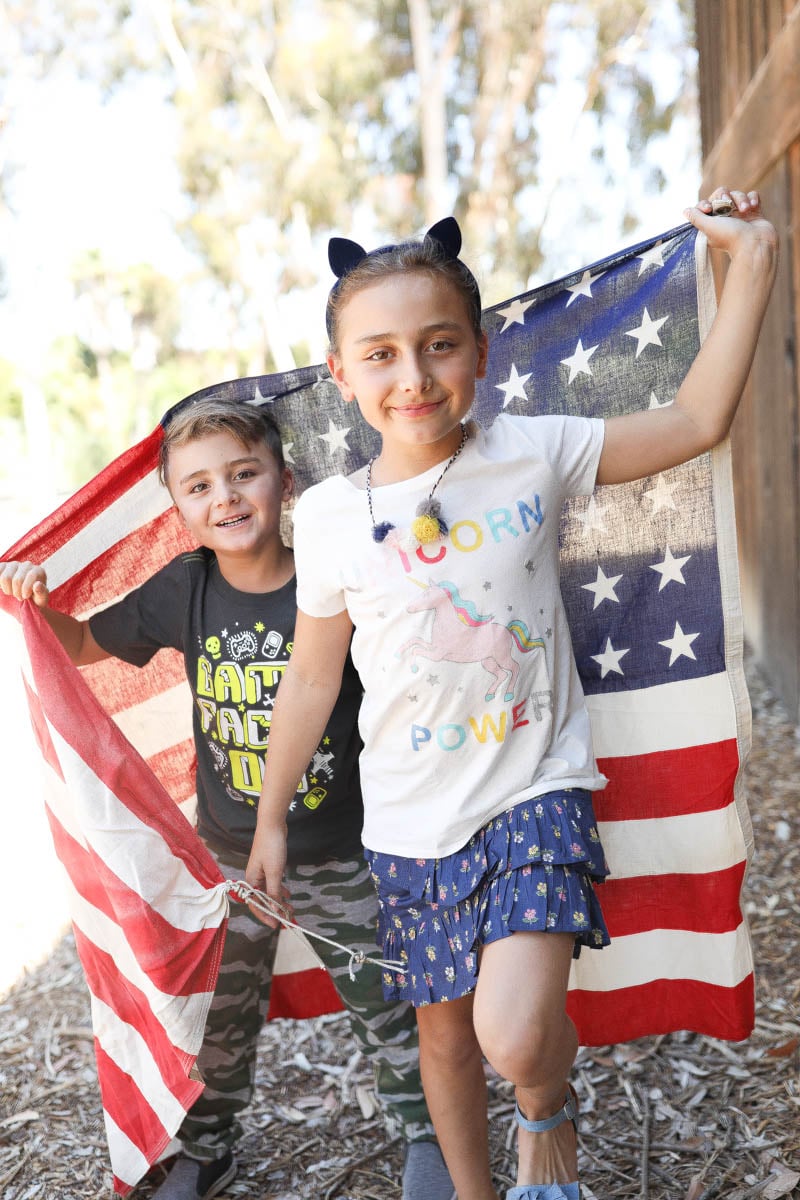 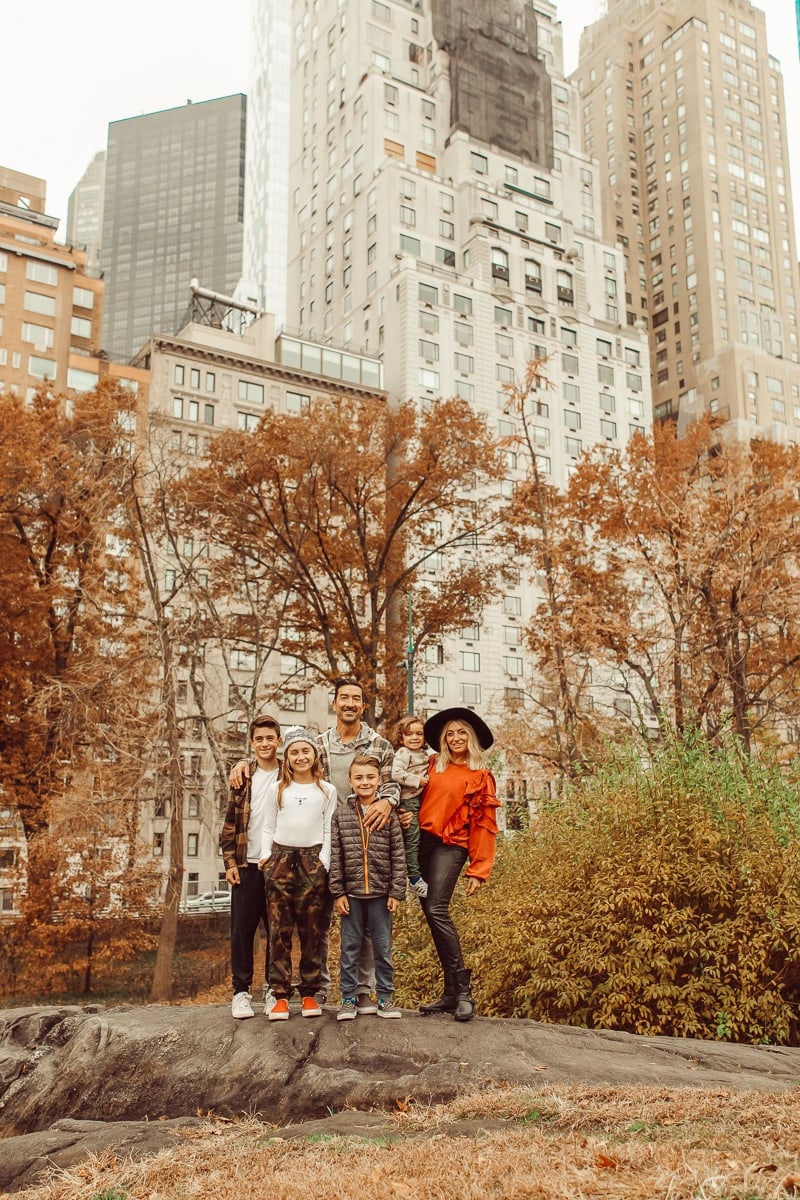 Trying to Pick Up the Pieces

I have come to accept that 9/11 will never leave us. It’s hard to believe that 20 years have gone by. When you live through something like this and when your husband fights in the war, it’s a day that never ends.

I am happy to say the nightmares have slowly dissipated, and my fear has lessened even though we still exist in uncertainty. Like my fellow New Yorkers, I continue on with my faith, praying and moving forward with a little more strength and a little more resilience. 9/11 will always be etched in my chapters, but I won’t let it define who I am. All we can do is educate, honor, and remember. One thing’s for certain: I’ll Never Forget! 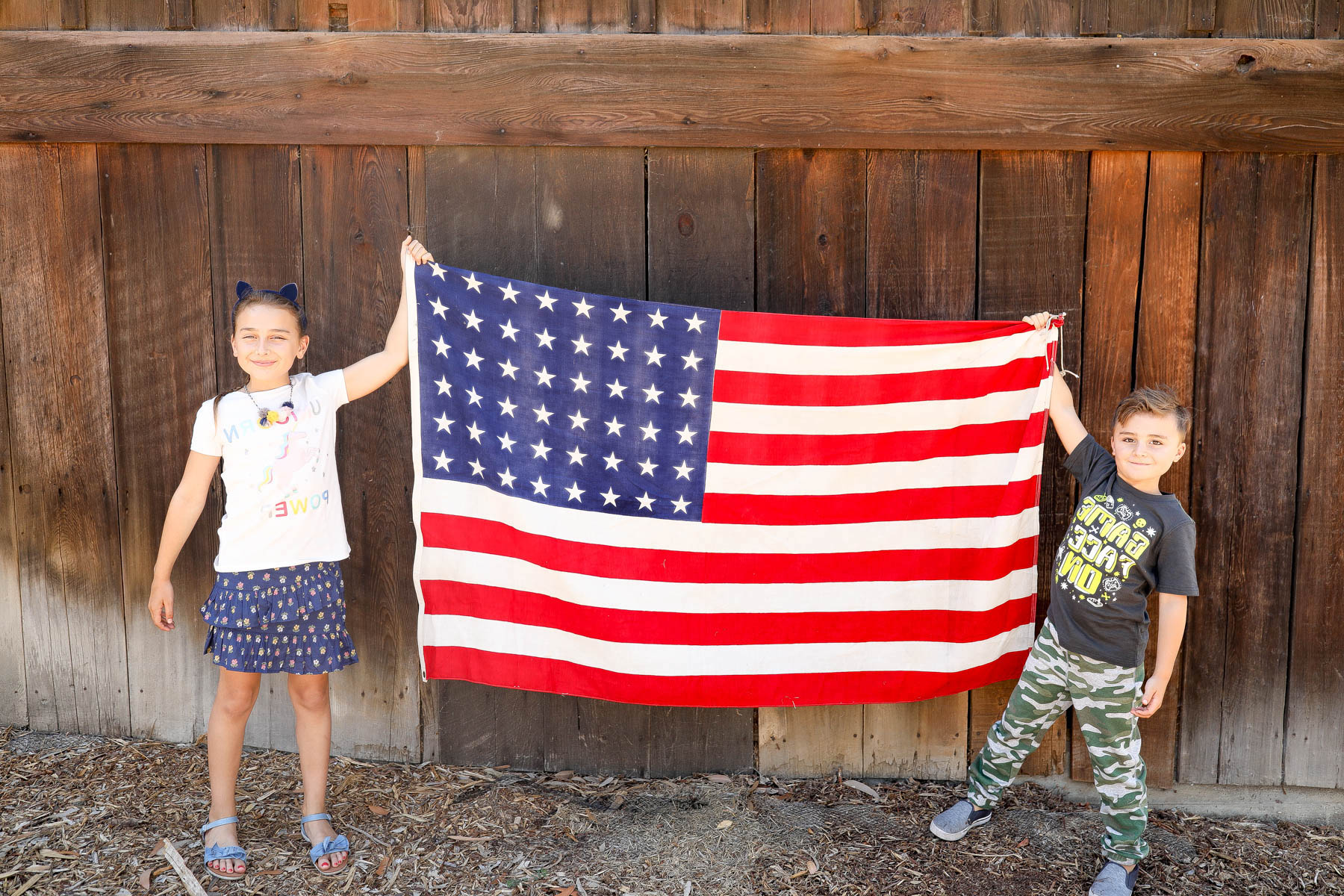 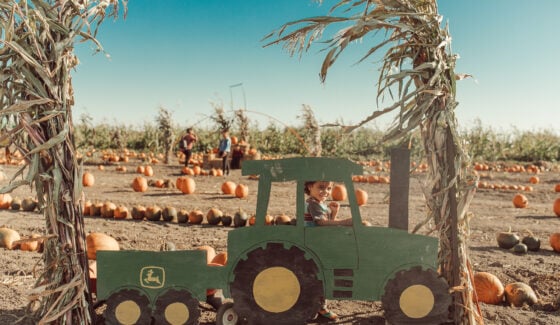 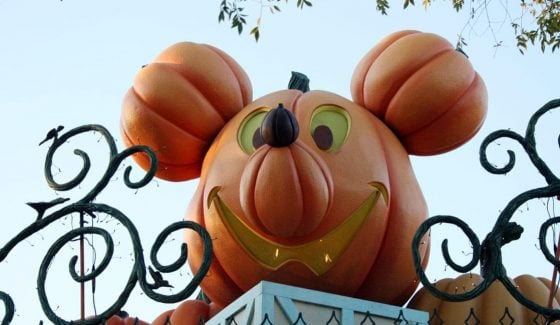 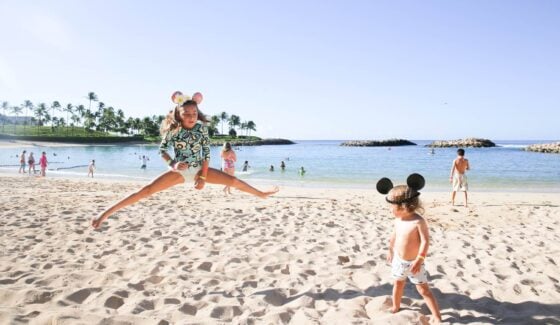 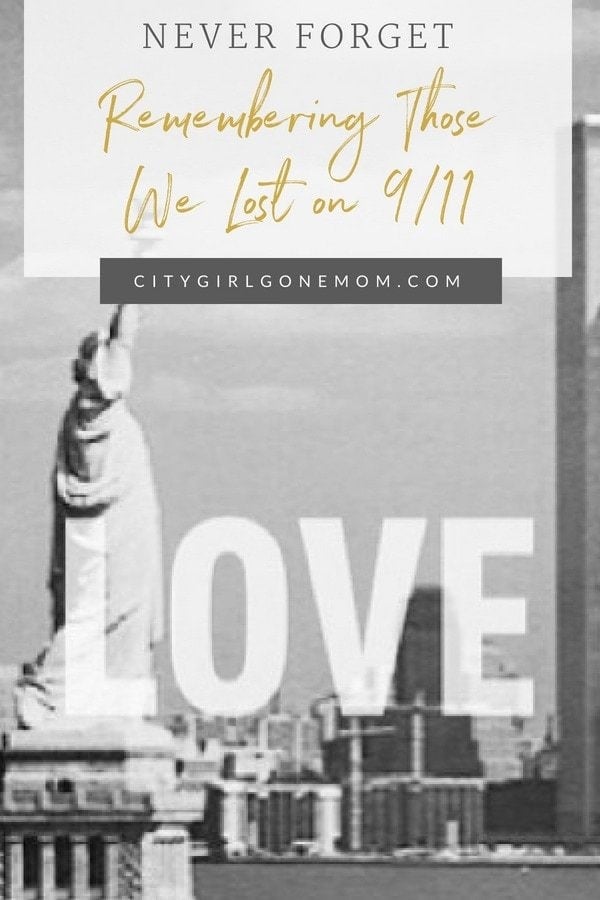 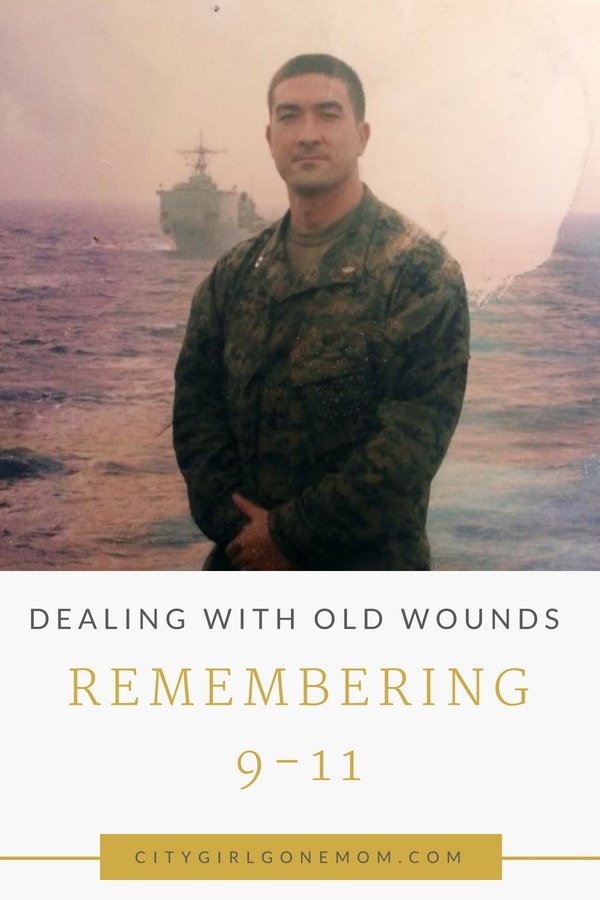 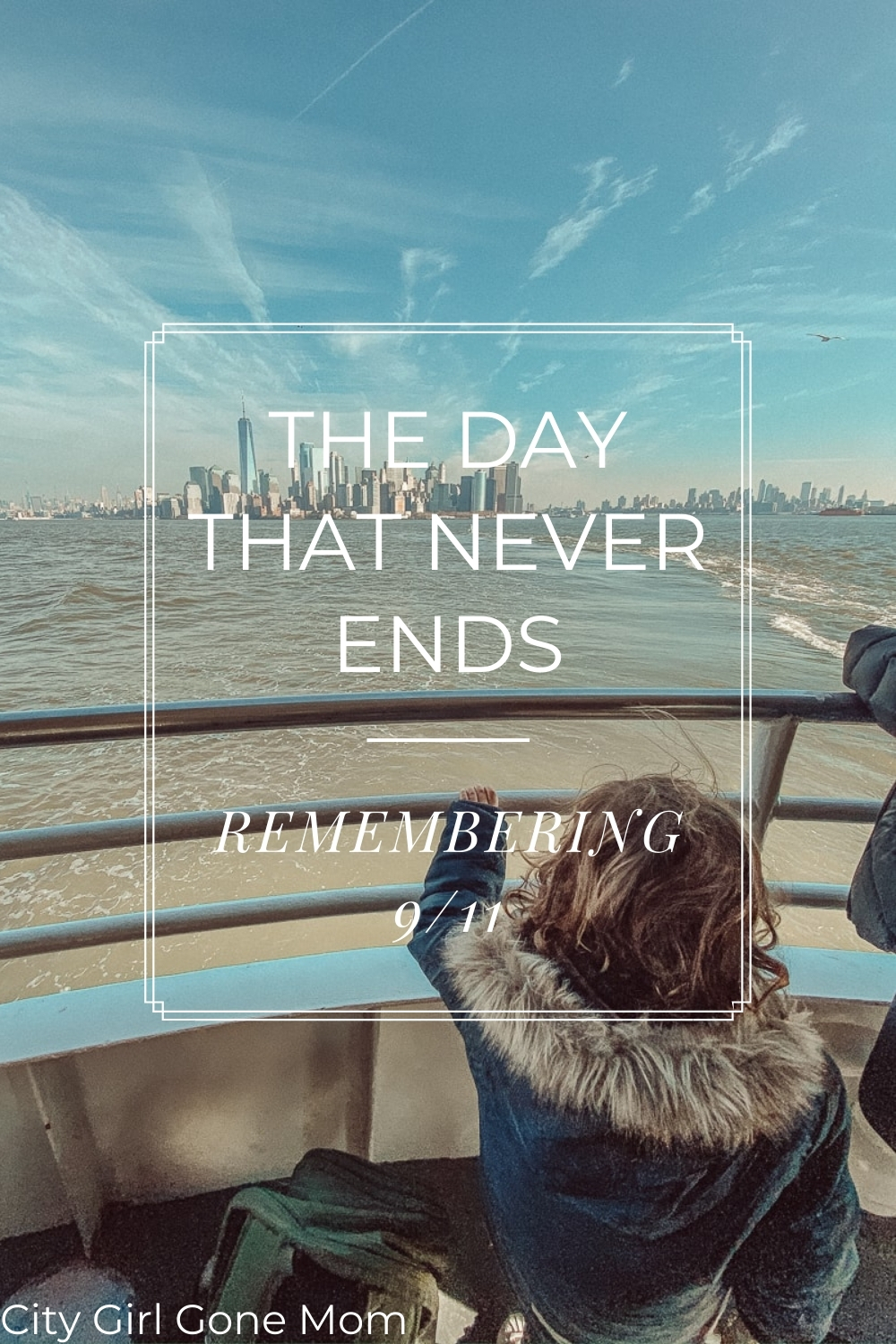 4 thoughts on “Remembering 9/11: The Day That Never Ends”